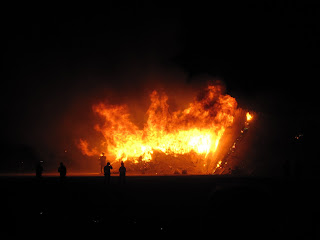 The burning of the temple
My voyage to Burning Man this year was epic. From the moment I left Vancouver on my motorcycle, and headed East into the BC interior, I felt transported 100% away from the daily routine that most of refer to as 'life'. With the wind in my face and the promise of new roads in my heart, I felt released....free!

Burning Man involves a LOT of burning. The largest most impressive structures are lovingly handcrafted and built almost entirely of wood, and on the last two nights of Burning Man, the 'man' and the incredible Temple (different and unique every year) are burned to the ground. On top of that many art installations in the desert are set ablaze on the last two night. 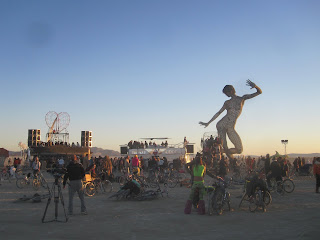 An amazing dance party in the middle of the desert at sunrise...
On top of that, there are pyrotechnics galore. Every year the fire experts try to top what they came up with the previous year, and there are a dazzling array of fire belching, computerized machines of all kinds here and there around Black Rock City and out in the desert (on the 'playa' as they say). Just down the street from the camp where I stayed, they let me handle an incredible kind of explosive propane fire throwing gun that was absolutely incredible! Pulling the trigger released a tremendous explosion of flame that mushroomed out like a special effect from a Bruce Willis movie! It was such a rush. I only wish I'd gotten some film of me firing it off. 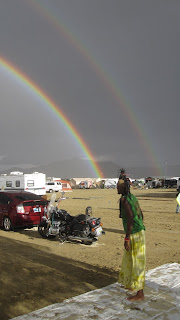 An incredible rainbow appeared after a
rainstorm on the first afternoon that I arrived
Although I did take quite a few photos, Burning Man is primarily a participatory event, and walking around taking pictures turns you in to an observer, not a participant. So I frequently left my camera behind, and just got right into 'being there' and absorbing as much as possible. From a special effects viewpoint, I can't recommend Burning Man enough. If this kind of stuff sounds interesting to you, then GO! Buy your ticket and set your sights on being there next year, and I'LL SEE YOU THERE!! 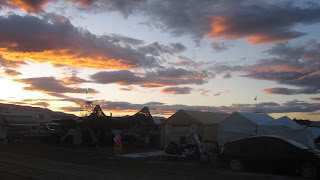 The sunsets on the first night of Burning Man 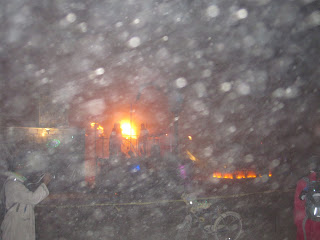 Pyrotechnics seen through the swirling dust 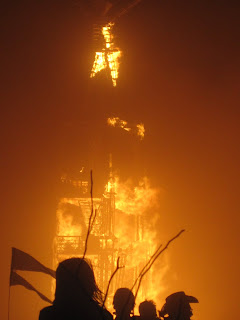 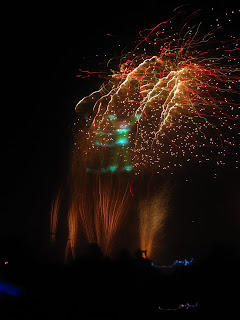 "walking around taking pictures turns you in to an observer, not a participant" - Joseph Gilland

... that sums up why I never carry a camera. Too many people live life through their camera, obsessivly photographing, uploading and tagging everything that happens to them. It reminds me of a type of people described in the book "brave new world" who were obsessed with recording audio cassets of their entire lives ....

Great comment Zeke, that's a great attitude....although I do post a lot of photos, I spend a great deal of time 'unplugged' simply absorbing my environment...

I wouldn't go to Bman without a camera. I choose the middle way. You don't always have to be taking pictures. To not capture some of the the amazing visuals of Bman is not an option. People who take pictures are participating in Bman. How else can the rest of the world see it. Another perspective.

Of course, I never go without a camera either, Burning Man is far too photogenic an event, I could not imagine NOT taking some photos! And I do the same thing, I will do a couple of 'photo excursions' but then not bring it with me the rest of the time. And then there are, of course, many times when I think, "Oh shit, I wish I had a camera!"

I can see your facination with Burning Man. I enjoy your studies of water and fire.

Very good job with this event that fires have never seen anything like this, congratulations on the field, I admire his work with special effects animation at my blog www.bagacaanimada.blogspot.com did a story about you and Michel Gagné, Brazil has published his book, so I imported from the amazon book Elemental Magic, if I lived in the U.S. would ask for an autograph, but it was worth the reward of having a book like this.

Thanks for your attention
Ale Barreto