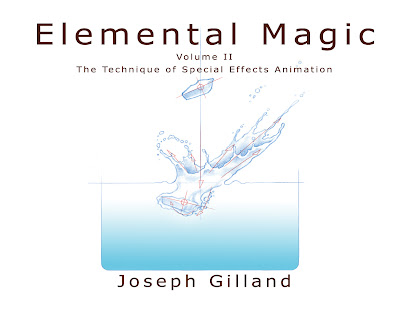 It is out now, ready to ship from all major bookstore warehouses, and Amazon's got a crapload ready to go too! If you are anywhere near Vancouver or Vancouver Island, drop me a line when you get a copy and I'll arrange to meet you sometime and sign it and give you a custom drawing on the title page too. Alternately, drop me a line from wherever you may live, and if I ever chance to meet that destination in my many travels, we'll do it that way, wherever that may be!

I have been digging into painting with acrylics, working like a madman around the clock almost, and although I've been coming up with some pretty cool and weird stuff. I still feel like I am still searching for my style a little bit, although the one thing I don't want to do is get 'stuck' in a particular style. Some of the pieces are safely within what could be considered 'my style' of drawing and colouring special effects like water, fire and stuff. But I am branching out into other styles as well, some heavily influenced by the tattoo culture's styles, that I have been studying and trying to learn for a couple of years now. Still others are purely decorative in nature, but still leaning towards an 'Elemental Magic' kind of a look, focusing on elemental energies as the driving force behind the paintings..... 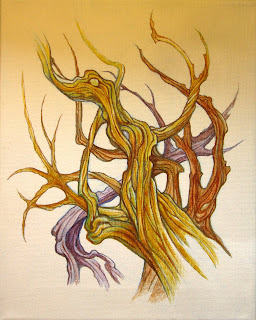 This simple arrangement of branches was as much of a test as anything, to see how I could reproduce the complex and twisted bark of a gnarly tree, one of my favorite things to draw, and a beautiful decorative element always. I hypothesize in my second book that much of the art deco decorative artwork that flourished in the mid-twentieth century was heavily influenced by a study of nature, and natural elements such as smoke, fire, water and all things moving. 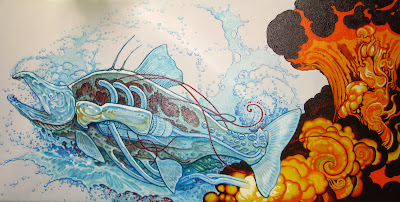 This wild painting was spawned by an interest in the local slamon's spawning ritual, as well as the furor that has arisen from the practice of farming salmon. The featured fish in the painting is completely at the mercy of the machinery surrounding him, and it is all fossil fuel driven. He is trying to spawn and propagate his species as he is chased upstream by the evil specter of industrial corporatism gone mad in an explosion of oil and gas... 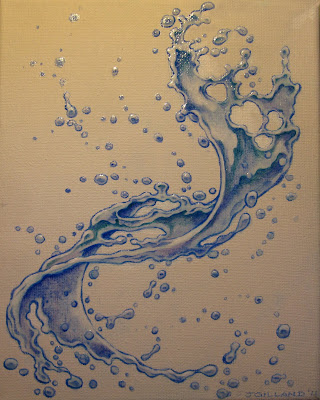 A simple water study, again a sort of practice run to get familiar with how to reproduce really good looking water with acrylic paints. I used many layers of glaze on this painting, only where the water is though, none on the background at all. The layers of glaze are built up so deep that the water effects, especially the large droplets, actually bulge quite far off the canvas, creating a very three dimensional effect. 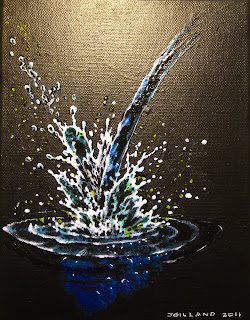 This water study on a black background was another exploratory painting, as I intend to create quite a few of these watery studies, as a part of my purely 'Elemental Magic' influenced pieces of artwork, which I hope will be popular and successful as paintings people will want to own. their smaller size makes for a more affordable price and they are easier for me to paint than brand-new subject matter. Watery effects are, after al, my thing. On this painting as well, I built up a lot of layers of clear and slightly blue tinted glazes, really popping the water up and off the canvas. The background has no glaze and is a flat black and thus absorbs all the light helping the water to pop out even more. 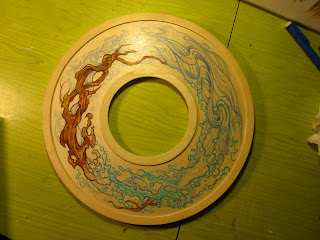 My sister brought over a cheap wooden frame as I had mentioned I'd be interested in painting objects like frames, lamps, you name it, just anything I might be able to decorate with Elemental Magic effects, or something like that. So I started a sketch on this simple pine frame, with Earth, wind, Fire and Water represented as it was on the cover of the first Elemental Magic. I think it looks absolutely amazing, and I am working feverishly on it, in fact it is already far more finished than the version here that I photographed this morning. I really love the way the elements are blending into each other and creating one image that is very integrated and whole. The rising wings in this painting are a portrayal of a dream I had. The theme is rising up out of chaos, fear and danger, and flying into the ether on white gossamer wings, high above the suffering and pain of lost and angry souls bent on destruction. I used many. many layers of glaze, with a tint of blue in it, and several clear layers too, as I slowly built up the layers of light and energy. It was a hard one to stop working on, I always wanted to add another touch up here or there, but I have finally stopped myself. 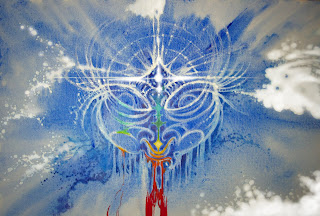 This one started out as an experiment with wetting the canvas first and doing a sort of water colour style for the background of the painting. I did this with a blue wash, that dripped and blended beautifully, creating a canvas that just screamed at me to fill in the gaps. i had no idea what I was painting going into this one, it just sort of emerged from the abstract watercolour shapes that I had created with my wash. I see it as a look inside at the structure of the soul, as it goes through it's difficult trials and tribulations of life. The colours dripping of of the chin of the face represent the full light spectrum, from infrared dripping as if blood from the mouth and then up to the ultraviolet at the pineal gland in the center of the brain.... through the chakras, the spectrum of our visibly perceivable world. 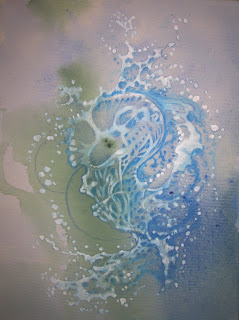 This one as well was done first as a water colour wash on the blank canvas, done with two different hues of blue. Again the image just sort of emerged from the shapes in the background. I was very divided on this one, whether or not to continue going with it and create a deeply glazed, magical piece, or to keep it simple and more raw. I decided to keep it simple and not embellish it too much, because I really liked the shapes that first emerged and just wanted to leave it on its own.

A sort of self portrait. This was one of my first paintings, but it sort of fell on the back burner for now, as it seemed to be getting over-worked and I wasn't sure what direction to take it in. I am waiting while I learn from the subsequent paintings I've been doing before I revisit this one. I think I will probably put a lot more work into it eventually, I still have a soft spot in my heart for this one. Think I need to make the eyes blue though..